Physics, The Internet, and Culture, Oh My!

The Web (yes, it is a place) has expanded network consciousness. As life itself is now widely considered to be a network of networks, inter-connected by information feedback loops allowing co-evolution, will human society’s impact on nature become more, well, natural?

The internet-based hypertext web, so far, has proven a great journey for much of humanity. It has changed our expectations for information access and pushed the boundary of our information rights, both for and against us. And it has greatly increased the frequency (if not always the quality) of our interactions with each other, as well as the mediating technologies.

The ‘net began as a defense science enabler, as science technique is almost inherently collaborative in nature (we’re always smarter in parallel than we are in series). Its design stems, primarily, from a need to provide time/distance-independent information transfer, and to de-centralize defence science information, thus survive nuclear attack. Thankfully, it never had to pass that test. But other tests have come, and more are certain to.

Both CERN and SLAC were created to “find out what the Universe is made of and how it works.” The physics knowledge base began, in the modern sense, with Newton. Newton’s ideas made the industrial revolution possible, which was really an economic revolution. The cycle around which our modern lives still revolve, for better and, in some ways, for worse (i.e. family and social fragmentation, environmental degradation/global warming, etc.). It is worth noting, while we’re at it, that if ROI was a factor in initial web development, it would never have been created. 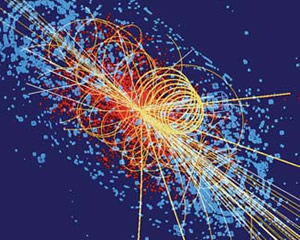 Both CERN and SLAC are particle research facilities, and the main technique they use is collision. Yes, smashing things—very small things—together, so to watch what happens. Let’s call it the first reality show. And maybe not terribly unlike usability research, metaphorically: only by planned testing (aka user science), and colliding a person with a user interface, and tracing their path, can we align interaction models and user’s mental models.

The first particle accelerators were of linear design. And I think we can say, too, that while the research was based on Einstein’s theories, the mental models scientists and engineers had while researching them were still fairly linear, that is Newtonion, so of the early industrial era. And the engineers who built the experiments were mostly linear thinkers (this I offer from personal experience… read on).

While the linear collider is still a valuable tool, the next step in the evolution of accelerators was to form a loop; the cyclotron. And while there certainly are connections between the evolution of physics, philosophy of life, and experiments to prove them, here we jump off the particle physics trajectory, and back on the origins of the web, and look at webs and patterns of life in general, for what they can reveal to us that is relevant to our work, and the work to come for restoring us to our higher ideals, and a healthier environment for all.

In some ways our understanding of ourselves follows from our understanding of our environment; the world which we co-evolved with. It will, I expect, someday be more apparent exactly how patterns of personal psychology and those of physics correlate. We have, however, extended universal harmonies in nature to our architecture, fine arts, and design. And we know intuitively that our own nature relates to us some truths of the universe, connecting us—consciously or not—to all. 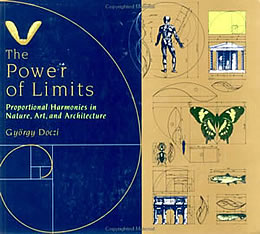 “It is said that the Buddha once gave a sermon without saying a word; he merely held up a flower to his listeners. This was the famous ‘Flower Sermon,’ a sermon in the language of patterns… If we look closely at a flower, and likewise at other natural and man-made creations, we find a unity and an order common to all of them. This order can be seen in certain proportions which appear again and again, and also in the similarly dynamic way all things grow or are made—by a union of complementary opposites. …Perhaps the message of the Flower Sermon had to do with how the living patterns of the flower mirror truths relevant to all forms of life.”

As patterns repeat throughout nature, and scale, the orbits and trajectories of atoms and molecules are much like those of planets and galaxies. So also the pattern of lightening resembles a tree branch, a mountain skyline, and a crack in concrete. So we see that patterns themselves, share shaped by their constraints and complementary opposites, qualities which are universal. As our understanding of nature evolves, our models, designed express it, should—and do—too.

Where Newtonian and Darwinistic models once influenced our understanding of nature and our relationship to it, and by extension, to a degree, to each other (e.g. social Darwinism), now those of systems thinking, and interconnected peer networks are slowly, but surely, making their way in to our collective consciousness, and by extension, our socioeconomic institutions.

And as interaction designers our theories and practices have shifted towards closer relationship to people (“users”), greater empathy for them, and more frequent feedback loops, so to co-evolve our design works with discoverable goals, needs, modes, and mental models. This more service-oriented model has obviously proven a boon to us and our industry. And we certainly need not think of services, economically, in competitive, Darwinistic, “eat or be eaten” terms. On the contrary, many of the best web services are simply those we want for ourselves, only shared with others (PDF). And this, I’m here to say, is a model better reflecting natural service exchange.

The challenge to user experience (UX, UE), user interface (UI), and interaction designers, as shapers and influencers of popular patterns of interaction between people and organizations via digital media, is to advocate, practice, and advance more organic modes and models of organization, collaboration, and interaction design, by utilizing naturalistic proportions, patterns, and the power of limits to liberate our right to pursue happiness, with ease.

This 4th of July, while we reflect on past triumphs, consider too what is necessary to regain, even advance, personal and social freedom. Iindividual, social and even economic freedoms have clearly lost ground in recent years. And though long and frightful the road home may seem, unlike Dorothy and her hangers on, we don’t need Oz to provide us hearts, minds, and courage. And thankfully: we will need them. 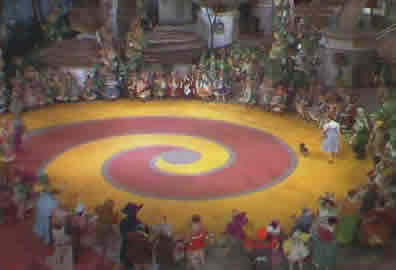 The Founders of the United States lived and died with courage and conviction to bring the individual rights and freedoms they declared inalienable to us in to political reality. At that time political institutions were the most powerful ones. It is said that a society’s values are reflected by the purpose of its tallest buildings. Our values now lay mainly in economic prosperity. Private commercial interests exert previously unforeseen power over our lives and fates, public and private, social and individual. While we have reaped great material benefits from our economic advances, is the bill yet to come?

It took a some thousands of years for democracy to spread from its philosophical roots, through the (pre-capitalism) Age of Enlightenment, to the majority of the worlds political systems. Should we extend our property in rights to commercial institutions, too, and their organizational structures, so that they incorporate our participation in their powers, also valid only through expressed consent?

There is a long way to go yet, before humanity can say it is “home free;” confident we will continue to thrive—or even survive—industrial (economic) affects on the only living environment available to us. There is a lot we can do, as designers and as citizens, to form a more perfect union with the essential patterns and principals of life (interrelated systems), to continue and enrich it. After all, what is more patriotic (and it is the principals that make the country, not visa versa) than asserting our independence from any Form of Government [that] becomes destructive of these ends?

Post Script: Incidentally, SLAC and I were born in the same year, and my father spent most of his working life there, as an engineer. I have bright and warm memories of my childhood visits there, of the kind, brilliant and hard working people, and of the procurement research travels I’d occasionally tag along on. I attended the 40th Anneversary of SLAC and it was great to hear the reflections and stories of those who’d pioneered the experiments, resulting in profound discoveries, which now affect each of our lives. It was, and I assume remains, an amazing and truly interdisciplinary collaboration.