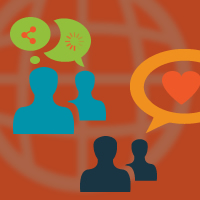 As you probably know the etymology of “democratic” is Greek; prefix demo- “people” + kratia “rule”. People rule in a democracy. If people rule in your design process, then it is essentially a democratic project. But ask yourself, do they rule… really?

Being a human-centered designer, and applying empathic design practices, are not just a matter of making web forms more usable and useful. It is a point of view, a stance, a way looking at other people that values them for what they are, and do, and want, not merely for what they can give you, or you can get from them.

Web heads have generally been of two types. Those looking to extend the preexisting society to the web, and those looking to extend the ethos of the web—network consciousness—to society. The first internet “boom” was the result of funding from, and for, the former. When that bubble burst, the latter regained some footing: web “2.0” (an expression I hold 0.0 affinity for) is the result. Lest we forget, the web “2-0” era originated in a major economic lull. Network consciousness has always ignited our collective imagination. Capital has usually come as a reaction, to establish and re-establish the internet economy. Which in turn has given rise to the experience economy.

The CEO of a private interest embracing social media is not too unlike Mikael Gorbachev embracing Glasnost. The problem is not that people leading companies don’t know how to participate in social media individually, or mistake the role it can plan in a democracy. The problem is of how the principals and practices of democracy can live in, and be expressed by, an unabashedly private, self-interested organization. And do so without coming across as completely inauthentic. Especially when our confidences in private enterprise are very low.

It is said that you can surmise the values of a society by it’s architecture. The purpose of its tallest buildings reflects its values. The evidence for this is historical. In ancient times religious temples and the tombs of kings were tallest. With the renaissance came more prominent civic structures. Now, of course, commercial buildings far, far outreach those of civics and religion. So while principals of democracy have won the in the public realm, the commercial one is the frontier where ideas of democracy and capitalism, private and public interest, are being gained and lost. That is to say; in our places of work.

I’m not advocating for democratic principals or commercial interests, one over the other. They seem to me like tides of influence, but of one sea. And of course one must make a living! But some balance, equilibrium, and sense of co-existence between them is necessary for society to be healthy.

It is interesting to note as an aside at this junction of political history that extreme capitalism in “the west” is waning, while a sense of social justice is waxing, exactly as socialism in “the east” is waning, while capitalism is waxing, and at hyper-speed. But regardless of whether “the company is the government,” as in unregulated capitalism, or “the government is the company,” as in unrestrained communism, social equity is the central problem. Interaction designers and those involved social media experience design have a central role in the future of the digital “cloudescape.”

If we’re serious about the enterprise we have to decide where we stand on social media not as a fad or fetish but as an expression of democratic principals. That is, if we mean to embrace social media in the post web “2.0” era, and we work in a private enterprise that intends to exploit social media somehow, then we have to determine the process by which democratic principals will be applied in the sphere of private interest. And yes, it is a little daunting. If not, I think we’re not really paying attention.

I am encouraged by these trends. Our better natures have again shown themselves recently, as election outcomes. Given the opportunity—a fair and carefully moderated system to participate in—they often do. But faith remains as necessary as action and interaction, by engaging each other both wisely as cleverly. Because there is, after all, a place for moral skill and practical wisdom in business, as well as politics.

The main shift in focus comes—dare I say it, as web “3.0”—begins to shift our design focus away from creating publications to creating participators in a larger information entity ecosystem. From design of “sites,” to design of systems. Which, of course, is already happening.

If we try to produce human-centric systems for collaboration and social interaction via non-collaborative, non-social or undemocratic methods and processes, that is, those of the industrial manufacturing age, then we will usually fail.

“Always design a thing by considering it in its larger context… a chair in a room, a room in a house, a house in an environment, an environment in a city plan.”
—Eliel Sarrinen

“Web as platform” is not only a matter of computer science. And social media is also a misnomer. We’re talking about systems that communicate with systems so that people can communicate with people. Of all these things, only the people matter. We The People.